The Dinosaur Who Couldn’t Sleep by Michael Salmon

The Dinosaur Who Couldn’t Sleep by Michael Salmon is a fun story about Lola, a shy diplodocus who has trouble finding a place to have a quiet night sleep. Lola ends up with a fun solution to her problem, ensuring her a good night sleep.

This was one of the books we picked up when my sons were going through their dinosaur phase. As a dinosaur story, we enjoyed reading this and the quirks of Lola and her loud neighbours, although it wasn’t much help with getting a boy to go to sleep. Somehow I don’t think a meteor will fall out of the sky to help him have a good night sleep.

The illustrations are also fun and simple. All the dinosaurs are easily recocnisable with expressive eyes. They are all very cute.

One feature of the book that we enjoyed is a general fact sheet about dinosaurs and another about the diplodocus before the story began. There is also a guide on how to pronounce the names of the different dinosaurs. This was both interesting and useful as some of the dinosaur names I didn’t know how to pronounce.

Today’s book is one that we memorised when my boys were small and going through their Dinosaur phase.

Dinosaurs Galore by Giles Andreae & David Wojtowycz is a fun book about dinosaurs, going through the different types with a little poem. With each dinosaur name, they put how it sounds underneath it. The advantage of this was we could pronounce the dinosaur names!

Each page has colourful cartoon dinosaurs on it that were stylised. They look very little like the pictures in some of the non-fiction dinosaur books we have, but each dinosaur is recognisable.

My favourite dinosaur is the diplodocus, and my kids loved the tyrannosaurus rex.

Keep your eyes out for the little pink dinosaur on every page.

When I read Alien’s Love Underpants, I knew it sounded familiar… that was because, when I raided the boys bookshelfs, I discovered Dinosaurs Love Underpants by Claire Freedman & Ben Cort. This is another book purchased during my boys dinosaur obsession phase. The combination of dinosaurs and underpants, how could a Mum of boys go past this book?

This book explores why the dinosaurs were really wiped out, and it has something to do with underpants. If you want to find out more, you’ll have to read the book.

The underpants in the illustrations are great fun, every time I read this book with my kids, they would discover a new pair and would often end up in stitches at the different undies in the book, especially the ones on the dinosaurs.

Dinosaur mad kids will love this book, and kids who love underpants. Be prepared for lots of giggles.

Dinosaur vs the Library by Bob Shea 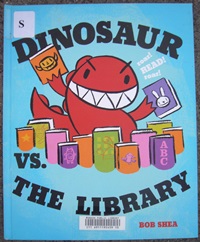 As well as being Valentine’s Day and International Book Giving Day, February 14 was also Love Your Library Day. So this book was a great book to read on February 14 (this post has been scheduled or I would have had too many books posted then!).

Dinosaur vs. the Library by Bob Shea is a cute book about a dinosaur who likes to roar. There aren’t many words, but those that are there are chosen carefully. The dinosaur roars in different places, and always wins, until he roars in the library. Will he be able to use his inside roar, and not roar for a whole story?

This has a message for kids about being quiet in a library and the win-win situation about sitting quietly during a story.

The pictures are simple and brightly coloured. The dinosaur is very cute.

As a mother who had kids obsessed with dinosaurs when they were 3 or 4 years old, this would have been a wonderful book to read to them to teach them about speaking in a quiet voice and the magic of sitting quietly during a story. Another aspect of this book that would have appealed to my boys is the idea of winning – both boys are very competitive.

Amazon.com – Dinosaur vs. the Library 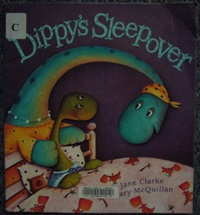 I don’t know what prompted me to pick up today’s book, Dippy’s Sleepover by Jane Clarke & Mary McQuillan, last time I was at the library. It might have something to do with the cute dinosaur on the cover.

What follows is a delightful story with a happy twist at the end of the book, and a strong message that many kids wet the bed and they will grow out of it.

I wish I had discovered this book a few years ago when I was having similar issues with my kids wetting the bed. They did grow out of it, as does Dippy the diplodocus.